The Teotihuacan Pyramids Outside of Mexico City | Without the Crowds

September 13, 201722 comments
Share this article
PinterestFacebookTwitterEmailLinkedInWhatsApp
Affiliate links and ads may be sprinkled throughout the free content you see below. If you purchase from one of these links I may receive a small commission, at no extra cost to you, but helping me cover the costs of Lauren on Location. Please see my full disclosure policy.

When asking around for tips on visiting Mexico City, one activity mentioned over and over was a trip outside of the city to the ancient city of Teotihuacan. After passing along the info to my parents and looking up reviews on the area, it was settled- we would spend one of our mere four days in Mexico City outside of Mexico City. This place looked worth it.
Instead of going at it on our own, since we only had a short time, we decided on a tour with Urban Adventures, a sub-company of Intrepid travel.  While many of the Teotihuacan tours seemed relatively similar, we went with Urban Adventures, instead, for the “after pyramid experience” which included visiting several local families who run small businesses in the area. As you may already know, I always try to Support Local as much as possible when traveling and loved the idea that this tour was helping to support small local family businesses.
The group Teotihuacan tour with Urban Adventures has an afternoon start time, but a few bloggers I personally spoke to really pushed to go in the morning. Apparently getting to Teotihuacan early means better weather and fewer crowds. Since we were four traveling together, and I happen to loathe crowds of tourists (I know, ironic), we decided to splurge a bit and go with a private tour and a morning departure.

Well, it was probably a mix of both our off-season trip (Mexican children started school the day before) and our early arrival time, but we virtually had the city of Teotihuacan completely to ourselves. As we parked the van in the lot, only 4 other cars in sight, the man running the ticket desk smirked at our guide remarking- “madrugando hoy?” AKA “starting on the early side today?” Apparently, Mexicans aren’t early risers, which only worked to our advantage.

So, I guess now I should tell you a bit about the history of Teotihuacan and its incredible pyramids. I’m not a history buff, and I don’t pretend to be, so I’ll keep this bit short.
You can find the ancient Mesoamerican city Teotihuacan around 40 kilometers from Mexico City in a sub-valley of Valle de Mexico.  The name Teotihuacan is also known as the “City of the Gods” and is home to some of the largest and most magnificent ancient pyramids in the world. These Mesoamerican pyramids were built in the pre-Columbian Americas and date back to around 300 BC. At its height, Teotihuacan had a population of around 150,000 and was one of the largest first cities in the Western Hemisphere.

To me, the most notable features were the two pyramids, Pyramid of the Moon and Pyramid of the Sun as well as the central Avenue of the Dead, the cities main artery lined by smaller, yet still monumental pyramids.
And that’s about where my expertise ends, so if you’d like to know more about the ancient city of Teotihuacan, and its Pyramids, check out UNESCO, (or the better option, go see for yourself!)

After a few hours exploring the site, taking in the views and climbing up both the Sun and Moon Pyramids, we head back to our private van to get to the good stuff- a short tour around the town. We were brought to three different family homes and got a real inside look at the local trades in the area.
At our first stop, we got a look at an agave plant, and its different ancient uses, such as for sap, sweetening, tools and even as needle and thread! This family also sells souvenirs made of local obsidian and showed us a little of the long process of preparing it in their small shop. We ended our first stop with a sample of Mexican delicacies ‘pulque’ and mezcal and then head back to the van for stop number two.

The second family we visited specialized in products made from different varieties of cactus, including jams, sweets, sauces, hot salsas, syrups, drinks and even soaps. It was unbelievable how many different products they could make from the cactus itself and its fruit. I couldn’t help myself at this stop and ended up buying a few different things for which I later had to check a bag… oops…
Finally, we ended our tour at the last family home for a delicious lunch that nearly sent me over the edge. Creamy chicken mole, veggie rice, tender pork and spicy Mexican soup. I ate myself into a mini food coma and set myself up for a nap on the ride back to the city. 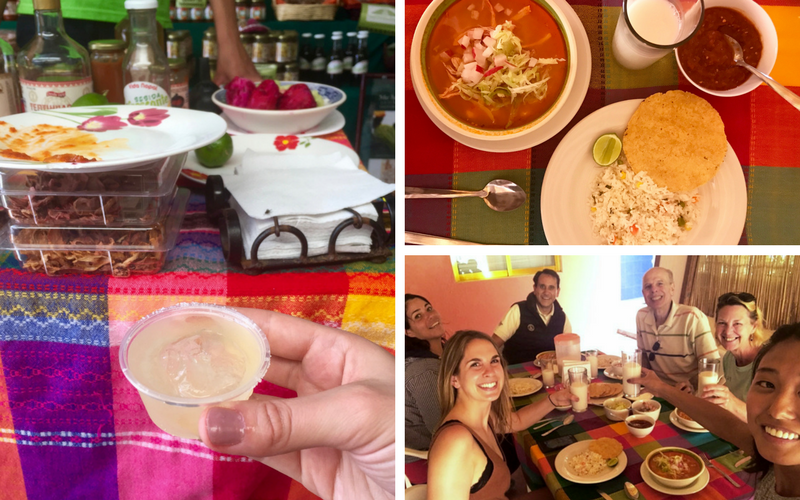 Tips for Visiting the City of Teotihuacan

Liked this post? Sharing is caring! Pin it and save it for later 😀

Have you ever visited an ancient site like this? Would you like to visit Teotihuacan one day?

Welcome to Wanderful Wednesdays!
Consider yourself a wanderer?! Well then, this Blog Hop is for you!
Meet your hosts: ME, Lauren of Lauren on Location, Van of Snow in Tromso, Isabel of The Sunny Side of This and Marcella of What a Wonderful World.
Here on Wanderful Wednesday we hope to promote an open and supportive community for like-minded bloggers- expats, travelers and all kinds of wanderers!
The linkup will take place every Wednesday at 8AM GMT.
Wanderful Wednesday Guidelines:

You can also pin your post to our new Pinterest Board! Let me know if you’d like the invite.
This week I’m highlighting The Couple’s Travel Quiz by Sarah at Endless Distances!  Even though I’m currently single, I still found this quiz incredibly adorable and such a fun activity to do with a partner. PLUS I have some pretty regular travel buddies that I could probably answer these questions with. If you haven’t already, be sure to go check out her post and spread the love! Thanks for linking up with us Sarah! ?
Happy Hopping Friends!! 😀 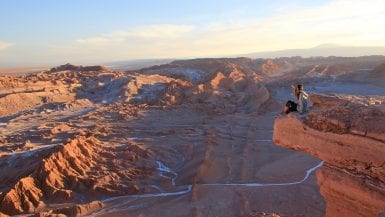 The 10 Most Common Chilean Slang Words: Lesson 1 in “Chilenismos”

What to do in Medellín | A One Day Medellín Itinerary