A Cooking Class in Tel Aviv with an Israeli Local

2 weeks ago3 comments
Share this article
PinterestFacebookTwitterEmailLinkedInWhatsApp
Affiliate links and ads may be sprinkled throughout the free content you see below. If you purchase from one of these links I may receive a small commission, at no extra cost to you, but helping me cover the costs of Lauren on Location. Please see my full disclosure policy.

During my recent trip to Israel with Birthright Shorashim, my friend Sasza and I decided that we really wanted to take a cooking class in Tel Aviv. I usually take food tours while traveling, but Sasza and I both loved Israeli food so much that we didn’t only want to try it, we wanted to learn about how to make it— so we could continue enjoying it long after our departure.

I’ve said this over and over here on my blog— but my favorite way to get to know a new place is through its culinary culture. Learning about a country’s culinary traditions, recipes and ways of eating/enjoying meals is a true window into that culture.

When doing some research online as to which cooking class in Tel Aviv would be a good fit, I found “Jon Jon.” His classes got great reviews and seemed to be the perfect mix of a mini food tour with some tastings and a cooking class— just what I was looking for! He was actually in the middle of moving his cooking workshop at the time we’d be in Tel Aviv, but he still agreed to fit us in.  🤗

Jon’s cooking classes start at Tel Aviv’s infamous Carmel Market, where he takes you to buy the day’s fresh ingredients, meet the local vendors and taste some typical Israeli market foods. He then leads you back to his workshop, now just around the corner from the market, to get down to business and begin whipping up your lunch.

All of Jon’s recipes are his own, and feature traditional Israeli ingredients and cooking techniques that have been passed down through his family. He really knows his way around a kitchen and comes from an incredibly culinary-focused background— both his brother and sister are Israeli chefs!

Like I mentioned above, the Carmel Market is the meeting point and start of Jon’s Tel Aviv cooking class and food tour. Sasza and I had actually already been to the Carmel Market a number of times before our tour, but our experience had been nothing like it would be exploring the stalls with Jon.

He knew everyone. Seriously, he had friends at almost every stand. As we walked through the narrow market alleys, vendors reached out to shake Jon’s hand, gave us samples of Israeli sweets and treats, and showed us to the best of the best produce they had to offer.

We started off the morning with a sampling of some very interesting and unique fruit juices (which Jon actually had to translate into English), then continued on to try a few traditional Israeli sweets, halva and baklava. It was just the snack I needed to hold me off until lunch. To close up our Carmel market tour, Jon told us which ingredients we’d need for our recipes and then sent us off to find them.

Fresh colorful produce in hand, we then head over to Jon’s workshop to start our cooking class. He offered us some drinks and then delegated tasks to get us started.

On the menu— Israeli street food!

A cool thing to note: Our entire Israeli street food menu for Jon’s cooking class was vegan and vegetarian-friendly! Going meat-free in Tel Aviv isn’t just easy, it’s actually a chance to sample the best foods that the city has to offer!

Many traditional [and well-known] Israeli recipes, like the ones you’ll find below, happen to be vegan and vegetarian friendly. Eating your way around the city, you’ll really feel an appreciation for the fresh ingredients and produce in Israeli cooking.

Here’s what we made in our cooking class:

The main attraction of our menu was Israeli Falafel. Did you know that these infamous Middle Eastern fried balls are actually Israel’s national dish!?

I hadn’t realized how many steps and ingredients go into making falafel before cooking with Jon, so now I have a whole new appreciation for these crispy little chickpea fritters. Jon had the chickpeas soaking overnight, so they’d be ready for us.

We sliced and chopped up the secondary ingredients- onion, garlic, cilantro and parsley- and then mixed them together in a large bowl with the chickpeas. Then little by little we pushed the ingredients through a meat grinder, to create a paste-like falafel dough that was ready to be seasoned.

Jon instructed us- “a pinch of this,” “a touch more of that”- and then the mixture was ready to be made into balls and set in the deep fryer. We fried them in hot oil until browned and crisp, and then set them aside.

When Israelis eat falafel as “street food”, they usually stuff them into a pita bread pocket along with some Israeli salad, hummus, and tahini sauce.

This brings me to the following items on our menu…

I’m guessing you already know what pita bread is, and have probably tried it. But do you know how it’s made?

We started our pita bread from scratch, mixing flour, water, sugar, yeast and salt to form the simple dough mixture. We did this in an electric mixer, gradually pouring in the lukewarm water. Then we set the dough aside and allowed it to rise while focusing on the other elements that would make up our Israeli street pitas.

Once the dough had risen, Jon showed us how to knead it, roll it into circular balls and then pat it down to form flat dough rounds ready to be baked. In his studio, he even had a tabun, or a primitive Palestinian clay oven, burning away in the corner. The next step was to fire bake each individual dough round, to form a warm fluffy pita pocket.

Probably my favorite of the items on our menu was the homemade Israeli hummus. Although by the end of my 10 days in Israel I was definitely in need of a hummus hiatus.

Jon also had a bowl of chickpeas soaking overnight in prep for making our hummus. The first step was to de-shell these little buggers, which seemed to be a daunting task considering the quantity of chickpeas in the large bowl on the table. But Jon insisted that the de-shelling step was crucial for a truly creamy and smooth hummus. And who was I to second guess the pro?

Apparently the culprit behind all your hummus texture trouble can be attributed to the chickpeas themselves.  If you look closely at your chickpeas, you’ll notice a transparent outer layer- the chickpea skin. This should be removed before moving forward with your hummus.

So, we drained the chickpeas, and then went ahead with the de-shelling process. Luckily, Jon showed us a trick for getting this done quickly, and it really ended up being a simple part of the process.

To add a bit of color and contrasting flavors to our pitas, we also whipped up a quick Israeli salad. All of the ingredients that went into the salad Sasza and I had picked ourselves in the Carmel Market just moments before.

We chopped up some cucumbers, tomatoes, yellow bell pepper and red onion and then tossed it with lemon juice, olive oil, salt and pepper to create an incredibly colorful and tasty pita pocket topper.

To add a bit of spice to our menu, Jon showed us how to prepare a traditional Israeli sauce made with parsley, cilantro, garlic and hot peppers. He let us know that we could adjust the spice level based on our personal preferences, so we went for it and threw in a bit more hot pepper.

I had never had deep fried Cauliflower before, but damn was it good. We prepared this by first chopping and steaming the Cauliflower heads, then deep frying them in the same oil as the falafel. We had to do this very carefully as the water retained within the steamed vegetable made it a bit tricky to throw in hot oil, but Jon assisted us.

Once crisped on the outside we seasoned the cauliflower with some lemon, olive oil, salt and pepper and then topped it with the Yemenite Salsa.

Once all our courses were ready, we lined them up, and Jon showed us the proper (AKA Israeli) way to arm our street pita pockets.

First you slice open your pocket and add a generous layer of hummus. Then, throw in a few falafel, stuff in some Israeli salad, place in a few pieces of fried cauliflower, and to top it off drizzle with tahini and the spicy Yemenite salsa.

We left Jon’s studio with new friends— full, happy, and in serious need of a post-pita afternoon nap.

It was definitely a must-experience and a successful cooking class in Tel Aviv!

Thanks Jon, for sharing a bit of your Israeli culture with us through our taste buds! 🤗

For more information on Jon’s Carmel Market Cooking Class & Food Tour check out his website, or to go ahead and book a class, shoot him an email at joncookingclass@gmail.com.

Interested in cooking classes and food tours while traveling? Check out my other reviews and posts featuring culinary experiences from around the world.

Disclaimer: Jon graciously invited us to participate in his cooking class in Tel Aviv for purposes of this review. Still, as always, all opinions expressed in this post are my own.

All photos in this post were taken by Sasza Lohrey. 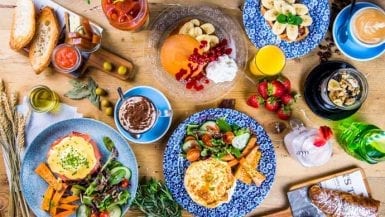 Valparaiso Restaurants | Where to Eat in Valparaíso, Chile

Where to Eat Fresh, Healthy and Organic in Santiago, Chile